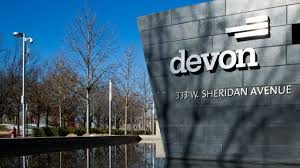 With fourth quarter earnings of $183 million and $2.7 billion cash on hand, Oklahoma City’s Devon Energy is laying out an aggressive 3-year plan for the company.

The net earnings figured out to 35-cents a share and the company said its operating cash flow for the fourth quarter 201 totaled $725 million, a 94 percent over the previous year.

But the company said in a statement it is using the success to move forward.

The company plans a 2018 capital budget of $2.2 billion to $2.4 billion and expects its upstream capital plans will drive U.S. oil production growth of nearly 14 percent compared to 2017.

“We expect to deliver a dramatic step change in capital efficiency, achieve attractive corporate-level returns and generate substantial amounts of free cash flow at prices above our base planning scenario of 450 WTI pricing,” said Hager.

Devon’s U.S. fourth quarter net production was limited until the tie-ins were finished.

The company said its well activity nationally was led by the Delaware Basin and STACK where its 30 operated wells in the quarter averaged initial 30-day production rates of greater than 2,500 Boe per day.

The company’s proved reserves were 2.2 billion Boe as of the end of 2017 which was a 5 percent increased over 2016 reserves.

Devon stated its fourth quarter 2017 results were not impacted by the Tax Cuts and Jobs Act signed into law by President Trump.

“In 2018 and beyond, Devon expects the tax reform to have an overall positive impact on its business,” stated the company, noting that the corporate tax rate was lowered from 35 to 21 percent.