Rep. Bridenstine Also Has His Supporters to Be Next NASA Administrator 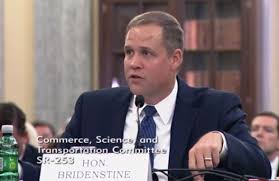 After being re-nominated by President Trump to become the next NASA administrator, Oklahoma U.S. Rep. Jim Bridenstine still faces a bumpy road in a confirmation process.

When the U.S. Senate failed to take up Bridenstine’s nomination before the end of 2017, the White House had to nominated him again to be considered in 2018. On Thursday of this week, the U.S. Senate Commerce, Science and Transportation Committee will again take up his nomination. Full committee markup will begin at 10 a.m. Oklahoma time.

Democratic Sen. Bill Nelson of Florida is publicly opposed to Bridenstine’s nomination and leads the Senate Democratic Caucus against him. Democrats opposed Bridenstine in his confirmation hearing held by the U.S. Senate Commerce Committee and were critical of his previous comments questioning global warming.

This week, the magazine Space News called for Bridenstine to be confirmed and for Sen. Nelson to give up his opposition.

Nelson has complained that the northeast Oklahoma Congressman does not have a technical background, but the magazine pointed out that two previous NASA administrators, James Webb and Sean O’Keefe also did not have such a background.

Before there’s any full vote in the senate, Sen. Nelson and other Democrats want a full 30-hour debate, the practice that’s under attack by Republican U.S. Sen. James Lankford who says it’s time to change the Senate rules.

Lankford complained that other Trump nominees had to undergo 30 hours of debate when in fact, there was no such debate by Democrats. Last week, the Senator took to the Senate floor to point out that when Democrats controlled the Senate four years ago, they limited debate. As the Senator said, “what’s good for the goose is good for the gander.”