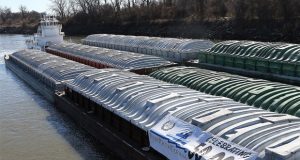 As officials at the Port of Catoosa wonder what 2018 will bring in terms of cargo traffic on the McClellan Kerr Navigation System, one port is already reporting record numbers.

Port Houston in Texas is reporting that 2017 was a record year. It reached the highest total tonnage in Port history of 38.3 million tons, beating the old record of 37.8 million tons set in 2014. Executive Director Roger Guenther said it was also record-setting year for container business.

“We are again on our way to another tremendous year of opportunity and growth at Port Houston,” said Port Commission Chairman Janiece Longoria.

Back in Oklahoma, operators at the Port of Catoosa say the rebound from low oil prices and the economic downturn played a role in increased traffic last year. Barge traffic and business at the Port had slumped in the 18 to 24 months prior to 2017.