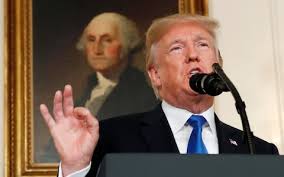 Another exchange of heated words has occurred after President Trump threatened last Friday to pull out of the Iran nuclear deal and reimpose economic sanctions if it doesn’t renegotiate the agreement.

Iran vowed over the weekend not to renegotiate and threatened retaliation against the U.S.  But Oklahoma U.S. Sen. Jim Inhofe stands with the President.

“A tough stance against Iran, especially after their  recent crackdown against peaceful protests, is exactly the right approach from President Trump,” said Inhofe.

In a statement from his Washington office, the Republican Senator said the U.S. should address Iran’s human rights abuses and ballistic missile tests.

“I have long identified the lack of inspections for undeclared sites, Iran’s ability to develop nuclear technology and sunset provisions as critical flaws of the deal,” said the senator who is a senior member of the Senate Armed Services Committee. “If these flaws are not corrected, I fully support the president reinstating nuclear sanctions against the regime in Iran.”

It’s the same deal where oil embargoes were lifted, causing concern about energy producers in Oklahoma and the rest of the U.S. last year.