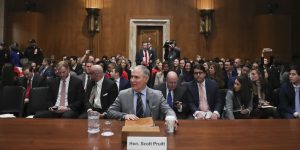 If EPA Administrator Scott Pruitt doesn’t think he took a beating Tuesday from Democrats on the Senate Environment and Public Works Committee, he took it in news coverage from environmental groups.

Democrats pounced on Pruitt with Delaware Sen. Tom Carper leading the way questioning him about the EPA’s decision last week to weaken air pollution protections. They even used large signs with Pruitt’s controversial quotes and raised them as they questioned him according to The Intercept.

“That was a policy decision that we have authority to make in the interpretation of statute,” replied Pruitt who tried to talk more about the statutes when Carper interrupted him.

“Yes or no?” asked Carper who didn’t get his answer. “Those are not yes or no answers.”

Another Democrat, Sen. Cory Booker of New Jersey grilled him about his commitment to environmental justice.

“Do you think that children handling dangerous pesticides is a good idea? ” he asked while Pruitt pointed out the proposed rule change is under review.

Observers said Sen. Tammy Duckworth was most pointed in her questions and challenged Pruitt’s commitment to addressing lead poisoning.

“That doesn’t sound much like a war on lead,” she said about his professed leadership against lead poisoning.

“Yes or no, will you direct EPA to finalize this rule in 2018 instead of waiting two whole years as recently announced?” she asked.

When he started to review the original 1991 Lead and Copper Rule, she cut him off.

Rhode Island Sen. Sheldon Whitehouse had his own quips when pressing Pruitt about some of his statements in 2016 on Donald Trump. Asked if he remembered making them, Pruitt answered, “I don’t, senator. And I don’t echo that today at all,” reported the Washington Post.

“I bet not,” Whitehouse shot back. The Senator went on to question Pruitt about his commitment to secrecy, noting his scheduled for a May 5 meeting in Oklahoma only references a lunch meeting.

“Would you tell us what you actually did that day and unblock your schedule?” asked a frustrated Whitehouse.

Pruitt refused to say and added, ” We’ll look and see how productive we were that day.”

I don’t see why you would block out parts of your schedule,” countered the Senator. “All we have is your lunch,. That’s a long way to go for one lunch.”