Congress to Explore How EPA Draws up Superfund Lists 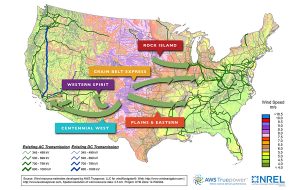 In the midst of spending billions on construction of a 700-mile transmission line from the Panhandles of Oklahoma and Texas to Tennessee, a Houston company has been told one of the biggest customers it was planning on won’t be part of the deal.

The Tennessee Valley Authority recently decided not to buy wind-powered electricity from the Plains and Eastern Line being built by Clean Line Energy Partners. It is one of the company’s biggest projects and the decision by the TVA not only upset Clean Line Energy management but environmentalists as well.

Nearly two years ago, Clean Line Energy said it expected to spur about $7 billion in new windmills in Oklahoma and Texas. It planned to sell 500 megawatts of wind generation to consumers in Arkansas and deliver another 3,500 megawatts of power to TVA’s western connections in the Memphis area. But TVA in December pulled the chair out the deal as Clean Line Energy execs thought they were sitting down to a deal.

The Authority stated it had enough power-generating capacity and was already working to achieve half of its electricity from non-carbon sources. It also said that committing to wind power would mean the construction of backup generation power plants because of the intermittent nature of the source.

Reports indicate the 700-mile line isn’t dead as another big Oklahoma wind power investor, NextEra Energy Resources has bought a part of the line. It will use the line to serve its customers in Oklahoma and the Midwest. NextEra purchased 420 miles of the nearly 700-mile line as OK Energy Today reported in December 2017.

Meanwhile, one published report quoted Clean Line Energy president Michael Skelly as indicating his firm would hang on to the permits and rights-of-way through Arkansas, just in case the TVA changed its mind.

“It killed what could have been one of the biggest and most important renewable energy projects in America,” said Stephen Smith, executive director of Southern Alliance for Clean Energy in Knoxville, Tennessee. He said his group is becoming increasingly convinced the head of the TVA is “anti renewable energy.”