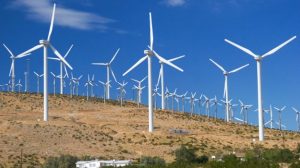 With a 100 MW wind farm already under development in western New Mexico, Tucson Electric Power has plans of yet another large wind powered project.

It’s issued a request for proposals for the design and construction of new resources to power nearly 31,000 homes a year. The company will seek bids for wind energy from resources interconnecting with its system.

The move comes as TEP works toward a goal of delivering at least 30 percent of its power from renewable resources by 2030, doubling Arizona’s 2025 goal. TEP hopes to contract with the successful bidder yet this year and begin receiving power from the new wind resource in 2021.

The Tucson-based company already has contract rights to 80 MW of operating wind power in Arizona. It also has more than 560 MW of renewable energy resources including solar PV, solar thermal, wind and biomass.