Pruitt Gets Another Top Aide at EPA 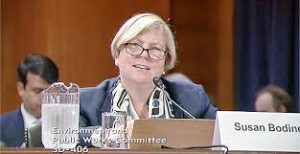 The U.S. Senate has confirmed Susan Bodine to head the enforcement arm of the U.S. Environmental Protection Agency. She will be the third high-level official after Administrator Scott Pruitt.

She is a former chief counsel to the Senate Environment and Public Works Committee and was the committee’s top attorney in January 2015.

With the confirmation, she becomes an assistant administrator in the EPA’s Office of Enforcement and Compliance Assurance.

Oklahoma U.S. Sen. Jim Inhofe worked with her on the committee and helped in her confirmation.

“As the former general counsel of the Environment and Public Works Committee and a former EPA staffer during President George w. Bush’s administration, Susan has a wealth of knowledge and experience making her the right person to work with Administrator Pruitt to faithfully enforce our environmental laws,” said the Senator.

Just a few months ago, two senators had threatened to hold up her confirmation because they were concerned she was already serving as special counsel to Pruitt while waiting to be confirmed. But Democratic Senator Tom Carper of Delaware said he was satisfied with the responses from Bodine and the EPA.