Google to Get More Power From Oklahoma Wind Farms 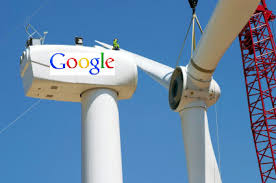 Google’s made another big move toward getting electrical power from wind farms in Oklahoma and South Dakota.

The company announced this week it is buying 536 megawatts of new wind capacity from four U.S. wind farms.

One of the farms is the  Red Dirt wind farm in Oklahoma. Google signed an agreement with the Grand River Dam authority to obtain 140 megawatts of power from the Red Dirt farm owned and operated by Enel Green Power North America. The Red Dirt farm has a planned production of 300 megawatts of electrical power.

Google’s other purchases will come from the Glaciers Edge wind farm in Iowa and the Coyote Ridge and Tatanka Ridge wind farms in South Dakota.

The company announced last year it wanted to be powered by 100 percent renewables by the end of 2017. Under the target, Google will get 95% of the renewable power from wind.  Prior to this week’s announcement, the company had signed agreements to buy a total of 1,800 NW of U.S. wind energy.