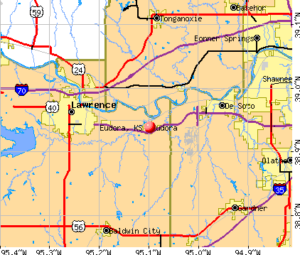 The earthquake and wastewater injection well debate is growing in northeastern Kansas.  Environmental groups are fighting a plan by a Florida company to drill two saltwater injection wells near the town of Eudora, arguing they will create the same kind of earthquakes experienced in Oklahoma.

But there’s pushback from oil and gas consultant and geological Marty Dubois, according to the Lawrence Journal World.

“The proposed wastewater injection will not cause earthquakes to occur in Douglas County,” he wrote in a letter to the city of Lawrence and Douglas County officials. “If operated as prescribed by the Kansas Corporation Commission, it will not pose a hazard to groundwater.”

He pointed out that more than 100 such wells have already been drilled in Douglas County with no production of earthquakes. Environmentalists want more study of the request before state regulators grant a permit to Midstates Energy Operating, LLC of Florida.

Dubois also shot down arguments that confused “fracking” with the wastewater disposal wells.