Groundbreaking was set for this week to create the state’s largest capacity CNG station in Tulsa.

The CNG station will be located at the Timmons Oil company, 3003 E. Admiral Place in Tulsa. It was described as the state’s 121st CNG station.

“The location of this high-flow, heavy-duty accessible CNG station represents a crucial gateway to fleets traveling along I-44 and I-244,” stated SPARQ in making the announcement.  The company said the strategically located station is along the I-44 “CNG Corridor” and will provide a critical link in the state’s CNG fueling network. 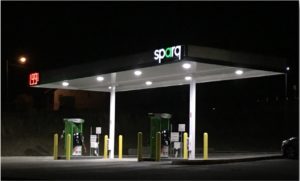 It will also provide, said the firm, more options for heavy trucks traveling between St. Louis and Dallas as well as CNG trucks operating in the Tulsa region.

SPARQ was founded in 2013 by three men who describe themselves as “entrepreneurial alumni of Chesapeake Energy.”