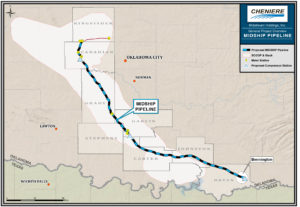 A  $1 billion pipeline from Oklahoma’s Kingfisher County south to Louisiana is planned by Houston-based Cheniere Energy.

The 200-mile Midship Pipeline will move natural gas to a south Louisiana liquefied natural gas terminal. There, the gas will be exported overseas.

The gas will primarily come out of the STACK and SCOOP fields to the company’s existing pipeline infrastructure. The line will stretch from Kingfisher County to Bryan County where it will be sent to the Louisiana Gulf Coast. Chenier has the nation’s only operational liquefied natural gas export terminal.

“Being able to allow Oklahoma’s natural gas to play a prominent role in the national energy discussion and global energy discussion is important for Oklahoma,” said Matt Barr, Cheniere’s director of government and public affairs. “And it’s important for those communities when you look at the investments and jobs and when you look at the ad valorem taxes that will be coming in as well.”

Cheniere is still going through the permitting process with the Federal Energy Regulatory Commission where it filed paperwork last spring. Actual construction is not anticipated until the spring of 2018 with completion later in the early or in early 2019.

At least 8 Oklahoma counties are involved in the placement of the line and the company is in the midst of meeting with residents and community leaders.