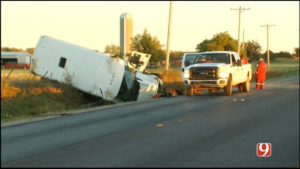 At least five people were hurt Wednesday morning when a Halliburton van overturned and crashed on a Canadian County road.

Reports by News 9 indicated eight people were in the van when it crashed around 6:20 a.m. near 164th and Calumet Road. The vehicle rolled several times. At least one of the injured was flown by medical helicopter to the OU Medical Center in Oklahoma City.

The site of the crash was approximately 2 miles north of the town of Calumet.