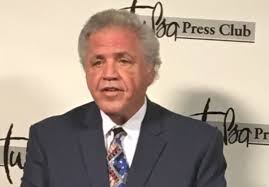 “I am the only candidate for Governor who even attempted to stop the tax increases and I’m not even an elected official like some of my opponents,” said the former U.S. Attorney in responding to Tuesday’s 6-3 ruling.

Richard and the Sierra Club had filed suit challenging the constitutionality of the fee on electric vehicles.

He tried to turn the ruling into a political and campaign issue.

“Oklahoma deserves a leader who puts their words into actions. Imagine what will happen when I get elected as Governor.”