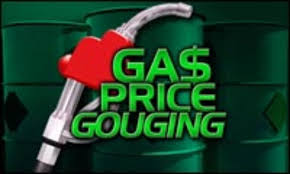 More than 100 businesses in Texas have been hit with price gouging charges following Hurricane Harvey.

The Texas Attorney General’s Consumer Protection Division notified 127 gas stations this week they were accused of price gouging. In some of the cases, the stations charged nearly $4 a gallon for unleaded gas.

“At the outset of Harvey, I made it clear that my office would not tolerate price gouging of vulnerable Texans by any individuals or businesses looking to profit from the hurricane,” Attorney General Ken Paxton said in a news release. He said the investigation is ongoing.

Paxton’s office received nearly 5,500 complaints during the Harvey disaster as motorists tried to fill up. Some of the complaints came from the Dallas-Fort Worth area.

The notifications came after Paxton sued Bains Brothers, a firm with Texaco-branded gas stations in Arlington, Carrollton and Richardson. In those cases, the stations sold gas in the $3 to $4 range but reportedly charged up to $6.99 a gallon for regular unleaded gas.

What will happen to the stations accused of price gouging violations? Under the Texas Deceptive Trade Practices Act, the attorney general can sue for up to $20,000 per violation.