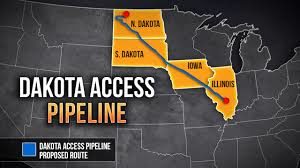 Some last-minute filings were made by American Indian tribes still fighting the Dakota Access oil pipeline in North Dakota. They are still trying to persuade a federal judge that Texas-based Energy Transfer Partners has overstated the potential impacts of a shutdown of the pipeline.

They contend ETP “made reckless choices and it must accept the consequences,” in their filing made before U.S. District Judge James Boasberg in Washington, D.C.

ETP contends a shutdown of the line would cost it $90 million a month. The line became operational in June but Judge Boasberg ruled the Army Corps of Engineers did not adequately consider how an oil spill under Lake Oahe in the Dakotas could affect the Standing Rock Sioux.

Some energy trade groups were allowed a say in the legal fight and contend any shutdown “would result in substantial financial loss and uncertainty for upstream producers, shippers, downstream refiners, manufacturers, retailers and consumers.”