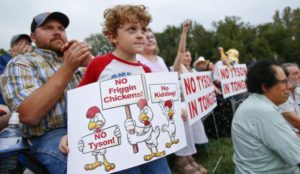 Amidst a fight against a proposed giant $320 million Tyson food chicken production and slaughtering hub in northeast Kansas were  cries of endangering people, the soil and water with industrial wastes.

The colorful protest held recently in Leavenworth County featured signs that declared “No Tyson! No friggin’ chickens! No kidding!”

It raised memories of the fight by former Oklahoma Attorney General Drew Edmondson against Tyson and its chicken operations in eastern Oklahoma and the polluting of the Illinois River.

Some 2,500 protesters gathered in Tonganoxie, Kansas to fight the plan by Tyson which was unveiled earlier in the month. It would involve a 300-acre main complex south of the city and poultry houses would be spread over a 50-mile radius of a facility capable of processing 1.2 million chickens each week, according to the Topeka Capital Journal. The project would involve a chicken hatchery, feed mill, meatpacking plant and an estimated 400 poultry grow houses.

But the protesters maintain such operations dump cancer-causing chemicals in the water and waste from the millions of chickens threatens water and soil. The spreading of chicken fertilizer was the basis for lawsuits filed by former attorney General Drew Edmondson in his legal battles to protect the Illinois River.