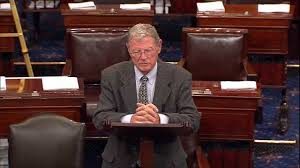 In a speech on the floor of the Senate, Oklahoma U.S. Sen. Jim Inhofe went after the media and at the same time defended the Trump administration saying some of the needless rules and regulations created by the Obama administration have been reversed.

“Some regulations and agency processes have a purpose and are important, but during the last Administration, new rules were created that seemed to have no purpose but to hinder economic growth,” declared the Republican Senator. “In the first few months of this Congress, we have been able to reverse some of these job-killing, economy-strangling regulations by passing 14 Congressional Review Act resolutions.”

Inhofe told the Senate the savings from repealing the 14 regulations are estimated at $3.7 billion in costs and 4.2 million hours of paperwork.

“The most expensive of which was repealed by the first CRA passed that I authored, which would have required oil and gas companies to disclose their “playbooks” on how to win deals, costing them $1.3 billion and putting them at a disadvantage with global competitor,” added Sen. Inhofe. “With every industry coming under scrutiny from every regulatory agency, Obama added more regulations to the federal register than any other president and businesses are complying with regulations at a cost of $2 trillion.”

Sen. Inhofe chided the media too, saying if you watch the news you couldn’t help but see that the media is showing a Washington that isn’t completely accurate.

“The news would have the public believe that there is a lot of dysfunction in the Administration and that nothing is getting done,” said Inhofe. He said the President has signed 45 executive orders with the goal of reducing red-tape and cutting back on what he called the “duplicative and harmful administrative state.”