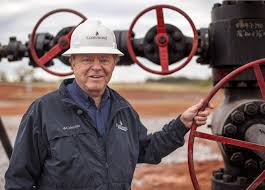 President Trump said last week that Harold Hamm could stick a straw in the ground and come up with oil.  Or in the latest STACK well his Continental Resources Company has produced, gas. Lots of it!

The Oklahoma City company reported this week a Blaine county well in the Mississippian that not only produced more than a thousand barrels of oil a day but nearly 3 million cubic feet of natural gas per day.

The Tres C. Fiu well, 17 15N 10W had a spud date of March 9 and drilling was finished on April 23 with completion made July 29. Located about 9 miles west of the community of Greenfield and 7 miles southwest of Watonga, the well had a measured total depth of 22,405 feet with a true vertical depth of 12,522. The completion report, as shown in OK Energy Today indicated oil production at 1,021 barrels a day while the natural gas production came to 29,590 Mcf.

But Hamm, the founder of Continental also had another major oil well in Blaine county—-one with more than 2,500 barrels of oil a day in production.

Blaine County also had two big producers for Devon Energy. The multi-unit Fleenor wells, 17 15N 10W are located about 7 miles southeast of Watonga. The first was completed Aug. 15 and had oil production of 1,945  BOD along with 5,021 MCF of gas. A day later, Devon brought in the second Fleenor well at the same time with production of 2,146 Bod and 5,342 MCF of gas.  Both wells had measured total depths of more than 21,000 feet.