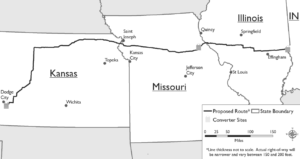 The company wanting to built a 780-mile long transmission line to carry western Kansas wind power to Illinois and Indiana has hired former Missouri Governor Jay Nixon in its fight with regulators.

The $2.8 billion Grain Belt Express line is the proposal of Clean Line, a Houston, Texas based company that’s run into a fight with Missouri regulators. So it’s hired a St. Louis law firm where Nixon is now employed. Before he left office, Nixon had publicly supported the project.

This week, Clean Line filed an appeal with the Public Service Commission which had denied the company a certificate of convenience and necessity. The rejection was made in August.  All five members of the commission were appointed by Nixon when he was a two-term governor in Missouri.

The Commission ruled against Clean Line’s application because it had not obtained approvals for the line in 8 counties in northern Missouri. Clean Line contends the decision is in contradiction to the dormant Commerce Clause which says states cannot discriminate against interstate commerce.