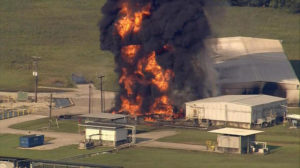 The EPA has started investigating the chemical plant disaster that followed Hurricane Harvey flooding near Houston.

It has made a request of the French company that owns the Arkema Inc. facility where chemicals exploded and caught fire. Reports indicate the Environmental Protection Agency is attempting to determine whether there might have been violations of the Clean Air Act.

The government is asking the company for “a detailed description and timeline of events” regarding the storage and handling of the organic peroxide chemicals stored at the facility. Arkema has 10 days to respond to the request made by Cheryl Seager, director of EPA’s compliance assurance and enforcement division.

The plant became a ticking time bomb when floodwaters surrounding the storage buildings and eventually the plant lost all electrical power, including from its emergency generators. Eventually the highly-volatile chemicals exploded and caught the plant on fire. More than a dozen first-responders had to be hospitalized from the toxic smoke. Now seven of them have filed suit against the company.