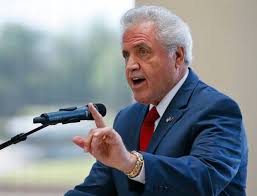 He sued the state over an electric car tax and now Gary Richardson, the former U.S. Attorney running for Governor in Oklahoma is encouraged by this week’s Supreme court ruling striking down a cigarette tax.

“We are encouraged by the Supreme Court upholding the intent of SQ 640, which was passed by the voters in 1992 to require either a supermajority of the legislature to raise revenue or send the measure to a vote of the people,” said Richardson in response to the Thursday court ruling.

He agrees with the court that the cigarette tax created by the legislature violated Article 2, Section 33 of the Oklahoma Constitution “just like the three bills I challenged in court.”

The Supreme court on Tuesday heard arguments from his attorney in his lawsuit challenging new fees on electric and hybrid vehicles. Richardson, running for the Republican nomination for Governor agreed with the opinion written by Justice Patrick Wyrick who stated, “If this quintessential excise tax can be transformed into a fee merely by calling it a fee and adding some regulatory gloss to the measure enacting it, then the promise of Article V, Section 33—a promise made to citizens in 1992 when they went to the polls and enacted the amended version—will be an empty one.”

The justice went on to write such tax measures had to be approved either by a vote of the people or receive a three-fourths majority on both houses of the legislature.

“And that, we think, would be an abject failure to carry out ‘the manifest purpose of the framers and the people who adopted it.'”

Richardson called it “heartening” to see the Supreme Court bring clarity to the issue.

“We hope that Supreme Court will view our challenges to the car sales tax, electric and hybrid vehicle fees and the decoupling of the standard deduction through the same lens when they release their decision on the other challenges to the revenue-raising measures,” said Richardson.