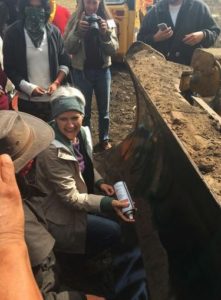 Former Green Party presidential candidate Jill Stein won’t have to spend time in jail for her protest nearly a year ago of the Dakota Access oil pipeline in North Dakota.

She was charged  for spray-painting a bulldozer last fall at a construction site. Her running mate, Ajamu Baraka got the same deal.

The two were at the pipeline construction site on Sept. 6, 2016 where the equipment was vandalized.

“I approve this message,” is what Stein painted on the bulldozer in protest that it had “used to destroy sacred burial sites of the Standing rock Sioux.”

The $3.8 billion pipeline, built by Energy Transfer Partners of Dallas started moving oil from North Dakota to Illinois on June 1.