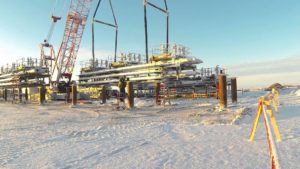 ConocoPhillips finally gets permission to expand Alaska’s existing North Slope oil field. But it’ll cost the company $7 million in payments to the state and it has to pledge to drill a well by June and make other development steps.

The $7 million in payments will exist only if ConocoPhillips will bring the new leases into production in the coming years. If the company accepts the deal, it might lose the Tofkat-area leases if it does not drill in time.

The targeted area is about 9,000 acres and extends south from ConocoPhillips’ existing Colville River Unit.  Alaska is pushing the speedy drilling to replace revenue after the state decided against auctioning the Tofkat area in a competitive lease sale.

The state is reported to be desperately seeking new revenue to solve its $2.5 billion deficit.