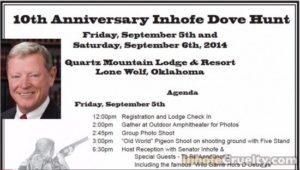 An investigation has determined Tom Buchanan, member of the Oklahoma Water Resources Board and general manager of a southwest Oklahoma irrigation district violated federal law 3 years ago by allowing Sen. Jim Inhofe to hold a political fundraiser on public land.

On July 17, the U.S. Office of Special Counsel ruled Buchanan, who is also president of the Oklahoma Farm Bureau, inadvertently violated the Hatch Act, according to the Oklahoman.

“OSC has concluded that Mr. Buchanan violated the Hatch Act by using his official authority as district manager to assist Senator Inhofe’s campaign,” wrote Erica Hamrick, deputy chief of the Hatch Act Unit. “However, OSC found no evidence that his violation of the Hatch Act was knowing or willful. Accordingly, we have decided not to pursue disciplinary action and instead issued Mr. Buchanan a warning letter.”

No penalty was issued by the federal government. The violation occurred during one of Sen. Inhofe’s annual fund-raising hunts which are usually held on private land. But in 2014, it was held on federally owned and managed land that’s part of the Lugert-Altus Irrigation District in Jackson County.