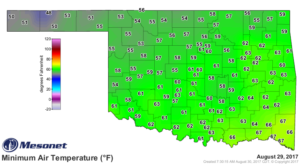 Cooler weather has definitely settled into Oklahoma this week with some overnight temperatures dipping into the upper 40s!

Gary McManus, State Climatologist with the Oklahoma Mesonet says it dropped to 49 degrees early Wednesday morning near Boise City in the Panhandle. A day earlier, there was a 48-degree reading also in the Panhandle.

He pointed out the daytime highs have been just as welcoming. As for the hot summer time weather we normally associate in August, the Mesonet’s 121 stations recorded a temperature of at least 100 degrees 22 times so far in August. The highest reading was 103 degrees on Aug. 5 in Kingfisher and Freedom. But the triple-digit temperatures were recorded on just two days—Aug. 5 and again on Aug. 19.

Is summer basically over?

“Now we’re not out of the woods yet. It will get warm over the weekend into early next week before another front comes through, but we’re not talking the brutal heat of early Septembers past. Some 90s, mostly. Barely in some cases,” wrote McManus in his Thursday Mesonet update.