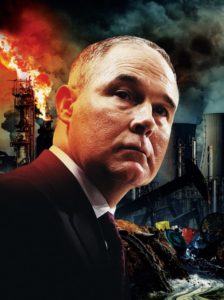 Rolling Stone magazine has gone after Scott Pruitt and his newly-introduced doctrines at the Environmental Protection Agency, accusing him of “gutting the agency, defunding science and serving the fossil-fuel industry.”

“Given Pruitt’s unabashedly pro-fossil-fuel agenda, it helps that he’s working for a president who generates such chaos that worrying about ozone levels in the air we breathe seems like a quaint concern,” wrote Jeff Goodell.

He suggested Pruitt’s running of the EPA indicates a desire for a higher office. Pruitt’s political elevation started in the Oklahoma legislature then to State Attorney General before being confirmed as EPA Administrator.

“But now Pruitt’s political ambitions will be measured against the future prospects of the planet – and the health and welfare of the people who live on it,” added Goodell.

In interviews with environmentalists and employees of the EPA, the magazine summarized that Pruitt has few checks on his power, most agency employees remain demoralized, and has met with few environmental groups but opened his doors to oil and gas industry leaders.

“To help with his cause, Pruitt brought in a team of experienced EPA-bashers and climate-change obstructionists, many of whom have worked for Oklahoma Sen. James Inhofe, the most notorious and flamboyant climate denier in Congress.”

The article quoted one anti-pollution advocacy group leader as saying, “He brought in the climate-denial all-stars.”

The magazine’s author indicated he attempted several times to get an interview with Pruitt but had no success.