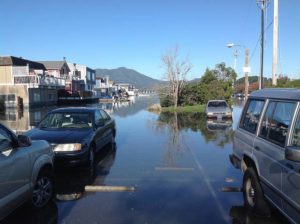 Oklahoma City-based Devon Energy is one of 37 oil, gas and coal companies sued this week by two California Counties blaming them for the sea level rise and coastal flooding.

Marin and San Mateo Counties along with the city of Imperial Beach filed suit claiming the energy companies knew for nearly half a century that unrestricted production and the use of their fossil fuel products created greenhouse gas pollution that warms the planet and changes the climate.

As the lawsuit filed in Marin County Superior Court pointed out, Devon Energy is the successor to the Pauley Petroleum Company which operated and owned a petroleum refinery in Newhall from 1959 to 1989 and a refinery in Wilmington from 1988 to 1992. Pauley merged with Hondo Oil and Gas Co. in 1987 and Devon Energy acquired Hondo in 1992.

Other energy companies named as defendants have long associations with oil and gas exploration in Oklahoma including ConocoPhillips, Marathon Oil and Anadarko Petroleum.

Among other defendants are Chevron, ExxonMobil, BP and Shell.

The energy firms were also accused of hiding the dangers of the high use and combustion of their products, thus adding to the buildup of CO2 in the environment that drives sea level rise. It predicts that extreme flooding events will more than double in frequency on California’s Pacific coast by 2050.

“Flooding and storms will become more frequent and more severe, and average sea level will rise substantially along California’s coast and in the San Francisco Bay Area including San Mateo County,” stated the lawsuit.