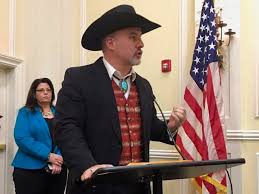 A re-shuffling of the leadership of the U.S. Interior Department has resulted in Secretary Ryan Zinke’s naming of Gavin Clarkson of Oklahoma’s Choctaw nation as a deputy assistant secretary.

Clarkson took over last month and is in charge of overseeing the Offices of Indian Energy and Economic Development, Indian Gaming and Self-Governance within the Office of the Assistant Secretary of Indian Affairs.

“Dr. Gavin Clarkson’s expertise in the areas of law, finance and economic development are a valuable asset to the Department of the Interior and the Office of the Assistant Secretary for Indian Affairs as we work together with tribes to increase economic opportunity and promote self-determination throughout Indian Country,” Secretary Zinke said. In announcing the appointment, Secretary Zinke also noted that the Financial Times had named Dr. Clarkson the nation’s “leading scholar in tribal finance,” and pointed out that he has been repeatedly cited by the Wall Street Journal, Bloomberg and USA Today on tribal finance and other Indian law matters.

He has been a consultant and advisor to tribal organizations and federal agencies on tribal finance and economic development issues.