DEQ Wonders How Budget Cuts Will Affect Its Abilities

Sen. Inhofe “Elated” at Trump’s Decision to Pull Out of Paris Climate Accord 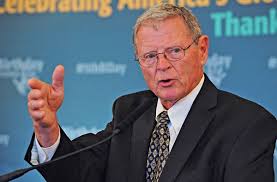 It’s the response from Oklahoma U.S. Sen. Jim Inhofe on Wednesday to word that President Trump would soon announce the nation’s withdrawal from the Paris Climate Accord.

Inhofe’s response came just a week after he took to the Senate floor and said, “If we remain in the agreement, we are putting ourselves at significant litigation risk.”

As OK Energy Today reported then, the senator urged President Trump to pull out of the deal agreed to by President Obama.

On Wednesday, Sen. Inhofe attended a briefing from Veterans Affairs officials at the Oklahoma City VA Center then was asked about the President’s decision to follow through with what the Senator urged him to do.

“He’s done a lot of great things. That’s one of the better decisions he’s made,” said the Senator, referring to President Trump.

To this day, Sen. Inhofe contends the goals set by former President Obama and others who signed the climate accord could not be met.

Listen to the Senator’s entire response.