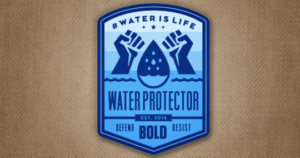 An Oklahoma veterans activist group with ties to the Standing Rock protest will challenge the controversial Diamond Pipeline by planting tobacco in its course, according to a press release issued by the group on Saturday.

The Oklahoma Water Protectors announced their intent to sow sacred traditional Mvskoke (Muscogee/Creek) tobacco plants in the pathway of the Diamond Pipeline. The demonstrators aim to visibly show the danger and wanton disregard of the pipeline project toward Native American customs, traditions and way of life.

“We are not inciting a riot, we do not condone the use of violence, we are peaceful, prayerful, and unarmed, we are not assembled under any organization – we are individuals acting upon our own accord,” said the press release. “We seek to not only stand for the citizens of Oklahoma and against the
destruction, chaos, and loss of life caused by Big Oil, but to also demonstrate to the rest of the world the dire, urgent, imperative situation being forced upon the people of Oklahoma. We will no longer tolerate being a “throw-away” people in a “fly-over” state. We stand to let everyone know the people of the state of Oklahoma are not dispensable.”

The $900 million Diamond Pipeline is a joint venture between Plains All American Pipeline and Valero. The pipeline route will carry crude from the oil storage facility at Cushing, Oklahoma across the national and historic Trail of Tears through Arkansas into Memphis, Tennessee. It crosses over 500 waterways, including the Arkansas River and Mississippi River. The pipeline also crosses smaller waterways, including some drinking water sources. The Diamond Pipeline is expected to be in service by the end of 2017. It is expected to transport nearly 200,000 barrels of crude oil daily.