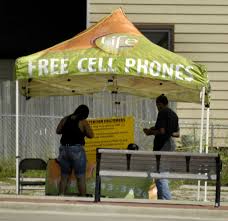 A phone giveaway program that has been the subject of numerous OK Energy Today stories was slammed today by the federal government which said the “Obamaphone” program was filled with fraud.

The report by the General Accountability Office found that nearly a third of those nationwide who got the free phones were likely not qualified, according to the Washington Times.

The same kind of alleged fraud has been reported extensively in Oklahoma where the FCC-directed system was called the Universal Service Fund. Formally, the Obamaphone program was called the Lifeline Program and to some, became a symbol of waste in the Obama administration. The Oklahoma Corporation Commission managed the funds in the state as small telephone companies sought millions of dollars in funds.

Other reports targeted the companies that used street-corner vendors to give away the phones without verifying whether the recipients met legal requirements.  OK Energy Today followed the problems with the system in Oklahoma.

Oklahoma Corporation Commissioners were aware of the weaknesses in the program in the past few years, as OK Energy Today cited 15 months ago. News on 6 also covered some of the alleged fraud.

In 2013, TerraCom LLC and YourTel America Inc., two Oklahoma telephone companies agreed to pay more than $1 million to the federal government for alleged improper reimbursements through the program. The settlement came after an investigation by the Federal Communications Commission into the participation of the firms in the Lifeline program.