NextEra Energy Strikes Out Again With Proposed Purchase in Texas 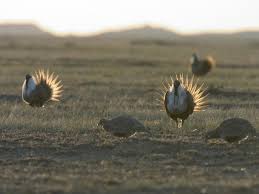 He announced this week the start of a review to determine if the plans are hindering energy production on the public lands.

Like Sen. Inhofe, Zinke has been critical of the Obama administration plans.

“While we in the federal government have a responsibility under the Endangered Species Act to take action, we also want to be a good neighbor, a good partner and recognize that a lot of the state agencies and the work that has been done thus far are really the forefront of the efforts,” said Zinke in making the announcement.

Officials from three Interior agencies will be asked to identify plan provisions that may need to be adjusted or rescinded based on potential energy extraction and other development on public lands, the agency said in a statement.

The Interior and Agriculture departments finalized their greater sage grouse plans in 2015 — covering grouse habitat across 70 million acres in 10 Western states — including amendments and revisions to 98 Bureau of Land Management and Forest Service land-use plans.

In 2015, Sen,. Inhofe accused the Obama administration of using the Endangered Species Act “to expand its reach into state and local governance on environmental matters,” calling them onerous land use plans.