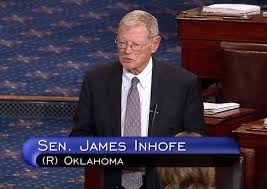 Oklahoma Senator Jim Inhofe lauded the U.S. Environmental Protection Agency’s announcement that it will roll back the Waters of the United States (WOTUS) rule, according to a press release issued on Tuesday.

With the new proposed rule issued Tuesday, the Army Corps of Engineers and the U.S. EPA would return to a system in place prior to the Obama Administration’s expansion of definitions under the Clean Water Act

“Thirty-two states, two courts and even Obama’s own EPA Administrator Gina McCarthy all agreed that the WOTUS rule was deeply flawed and an illegal land-grab by unelected federal bureaucrats,” said Inhofe. “The WOTUS rule was anti-farmer, anti-rancher and would have been devastating for Oklahoma landowners. Today’s announcement follows through on President Trump and Administrator Pruitt’s commitment to reign the EPA back to its Congressionally-mandated role. The revised rule transforms a harmful, overreaching regulation back into a common-sense rule that will return the jurisdiction of non-navigable waters back to the states where it belongs.”

Inhofe, a senior member of the Senate Environment and Public Works (EPW) Committee, has been a staunch proponent of President Trump’s executive order that initiated the dismantling process to the WOTUS rule.

Inhofe issued a September 2016 report entitled From Preventing Pollution of Navigable and Interstate Waters to Regulating Farm Fields, Puddles and Dry Land:  A Senate Report on the Expansion of Jurisdiction Claimed by the Army Corps of Engineers and the U.S. Environmental Protection Agency under the Clean Water Act, which detailed the expansion of the U.S. EPA and Army Corps’ jurisdiction.