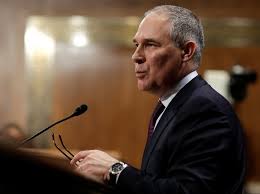 EPA Chief Scott Pruitt says there’s one way to make sure Superfund cleanups continue even with a 31 percent cut in funding for his agency’s budget.

His idea?  Make the polluters pay. It’s what he said in a recent TV interview.

“The great thing there is that there’s private funding. There are people out there who are responsible for these sites,” he said in the interview on “Fox and Friends.”

Nearly 30 percent of the Superfund cleanup budget would be cut under the Trump administration plan.

“You will do better than you asked for,” said Rep. Tom Cole of Oklahoma in a budget hearing held recently in Washington. He and other GOP lawmakers told Pruitt at the appropriations hearing they won’t agree to many of the proposed cuts. And Pruitt didn’t object to their contentions.