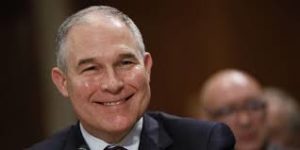 EPA Administrator Scott Pruitt’s decision to back out of being a speaker at an Oklahoma Republican party fundraiser now has Democrats on a U.S. Senate Committee wanting to know more about it.

After all, it was their letter and complaint that he had violated the Hatch Act which prompted the former Oklahoma Attorney General to pull out as speaker.

This week, Senators Tom Carper, Sheldon Whitehouse, Ed Markey and Jeff Merkley fired off another letter to Pruitt. In it, they asked for documents about his decision. All four are members of the U.S. Senate Environment and Public Works Committee.

“We appreciate your decision to cancel your keynote speech at the May 5 Oklahoma Republican Party Gala,” wrote the four on Monday as they went on to state his participation in the event “would have violated the Hatch Act.”

The four said their complaint warranted a full investigation and they wanted more documents including communications between himself and staff with OKGOP officials since Feb. 17 and about the fundraiser. Their request included documentation he relief upon to determine his participation in the event would not have violated the Hatch Act. They want to know about payment of travel, accommodation and other expenses related to the May 5 Gala. Their request covered any security detail that would have traveled with him.

Their request also covered communications about any other future political fundraisers he might have already attended as EPA Administrator.

The last part of their request covered how he plans to ensure his participation in future political events won’t break the law.