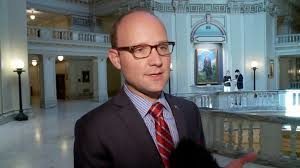 It might not be the kind of ‘line drawn in the sand’ by President Obama a few years ago, but one has been drawn by Democrats in the Oklahoma House of Representatives in what has become a growing war over taxes on the oil and gas industry.

“The message is this—-it’s time to come to the table,” said Rep. Scott Inman, Del City, the House Minority leader during a Wednesday morning state-capitol news conference.  “They have benefited from the most generous gross production tax cuts of any major oil and gas producing state in the nation and our state is cratering because of it.”

Rep. Inman, an announced candidate for governor, made it clear that Democrats would not support the Republican plan to raise gasoline taxes while not restoring the Gross Production Tax to levels of a few years ago.

“We know the citizens of the state don’t support a gasoline tax increase, especially when the wealthiest industry in the history of the planet continues to skate by unscathed,” charged Inman.

He said taxpayers realize what Republicans are trying to do….make up for cuts awarded the oil and gas industry a few years ago.

“Instead of raising those taxes that they cut, to put us in this mess, they’d rather raise taxes on middle-class families,” continued Inman. “It is absolutely a political position to say ‘let’s protect the oil and gas companies and hurt middle class families’.”

Listen to part of his news conference.