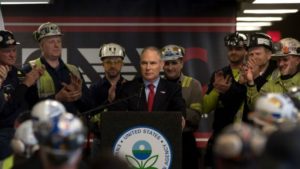 EPA Administrator Scott Pruitt was met with whoops, shouts and cheers at a Pennsylvania coal mine when he boldly declared, “The war on coal is done!”

It was at the Harvey Mine in Sycamore, Pennsylvania where he met with the miners and declared an end to the regulatory assault carried out by the Obama administration over the past 8 years.

He used the visit to slam the Obama administration for daring to single out one part of the national economy.

“It’s something that’s really sad over the past several years that a regulatory body would declare war on any part of our economy,” said Pruitt, the former Oklahoma Attorney General. He went on to accuse the Obama administration of forcing Americans into making a choice between environmental protection and economic growth.

” But the regulatory assault is over. We’re going to partner together with you,” promised Pruitt who said the EPA would move ahead with worthwhile environmental protections. “We’re going to do it the American way, grow jobs and show the rest of the world how it’s done.”

His visit and tour of the mine were part of a new public relations campaign by the EPA called “Back 2 Basics.” The EPA calls it a plan of “creating sensible regulations that enhance economic growth.”

It focuses on restoring states’ role in the regulation of local waters, clearing the backlog of new chemicals waiting to be approved by the EPA and helping states achieve high air quality targets. The agenda includes rescinding what the agency calls an “unjustified, premature evaluation of greenhouse gas and fuel economy standards,” and stopping the methane Information Collection Request.

Listen to his remarks.