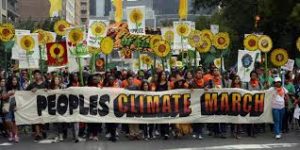 Oklahoma City will be the site this coming weekend as part of the national People’s Climate March.

A coalition of groups will host the march Saturday, March 29 beginning at 1 p.m. at the Harkins Bricktown Plaza. The event will invclude music, petitions, and children’s activities followed at 2 p.m. with speakers sharing environmental concerns.

At 2:30 p.m., the march will begin, heading east on Reno avenue then south to the Oklahoma River where a Native American Sacred Water ceremony will be held at the Devon Boathouse.

“The purpose of the Oklahoma City People’s Climate March is to bring local and state attention to the problems of climate change,” said Johnson Bridgwater, Director of the Oklahoma Chapter of the Sierra Club. “But the event will focus on sharing what can be done by each and every one of us to reverse course on this potentially devastating issue right here at home.”

The national and state events will be held on the 100th day of the Trump presidency and the event will call on President Trump to assure continued U.S. participation in the 2015 Paris Climate Agreement. The groups are also calling on the President to reverse his decision to slash the budget and authority of the Environmental Protection Agency.

“The Paris Climate Agreement was signed by 196 nations convinced that global warming and climate change are real, human-induced, and already causing great harm,” added Bridgwater. “However, all of these nations also agree that through strong action, the worst of climate change can be reversed by working cooperatively across the world.”