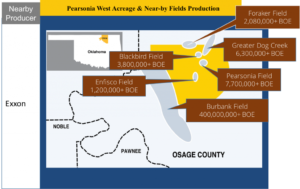 Drilling is expected to start this week on four exploration wells in Osage County by the New York-based Petro River Oil Corp.

Petro River has acquired 106,000 acres in Osage County in an area that it said had been the focus of a deeper horizontal play that turned out to be uneconomic.

The company said it has reprocessed 4,650 square miles of 3D to refocus on a shallow 3,000 to 4,000 foot vertical program targeting the Mississippian-aged Chat formation and Pennsylvanian-aged formations. Petro River officials say their plan is to drill the four vertical wells this week at a cost of $300,000 a well.

It estimates the wells could recover 6 MM bbls. The shallow wells present a lower risk and favor economically profitable, vertical exploitation of resources even at $30 a barrel oil prices.

Petro River limits its exploration to conventional drilling and does not engage in horizontal drilling, shale, tar sands or deepwater operations. Osage County isn’t the first area where it’s targeted what it calls “overlooked and undervalued assets.” It’s done the same in the San Joaquin Valley of California and the Larne Basin of northern Ireland.

It was a month ago when Petro River received approval for the Osage County development from the Bureau of Indian Affair’s Branch of Enforcement and Lease Compliance. The Branch completed an Environmental Assessment for the drilling permits.