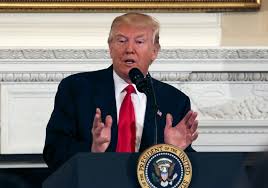 With the U.S. Environmental Protection Agency serving as a backdrop for signing the order, the President was surrounded by coal industry workers and government officials including EPA Director, Scott Pruitt. By issuing the executive order, Trump dramatically changes course on the highly charged issue of climate change.

“My action today is the latest in steps to grow American jobs,” said Trump. He added that his order is “ending the theft of prosperity.”

Pruitt is expected to erase Obama’s environmental agenda and rewrite the Clean Power Plan by removing stringent oversight while providing a mechanism for new jobs.

The new EPA Administrator is no stranger in dealing with contentious environmental issues. As Oklahoma’s Attorney General, Pruitt led the attack and was at the forefront of lawsuits challenging EPA regulations on carbon emissions and water pollution.