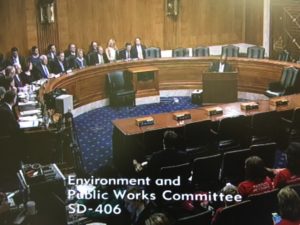 Oklahoma Attorney General Scott Pruitt’s nomination to take over as Administrator of the EPA is finally on its way to the full U.S. Senate but not without more political drama offered by Democrats on Capitol Hill.

When Democrats boycotted the meeting of the U.S. Senate Environment and Public Works Committee for a second straight day, Republican leadership of the committee was ready. Led by Wyoming Sen. John Barrasso, the Republicans voted unanimously to suspend the rules.

They then voted on sending Pruitt’s nomination to the Senate with Barrasso calling what the Democrats did a smoke screen.

The suspension of the rules was only for the business meeting to handle Pruitt’s nomination.

Listen to how the meeting happened.