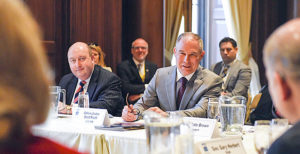 Make it three aides to U.S. Sen. Jim Inhofe who have now joined the Trump administration in energy and environmental positions.

It was announced this week that Inhofe’s longtime aide Ryan Jackson had joined Scott Pruitt at the EPA to become his top staffer. Jackson left Inhofe’s office to become chief of staff at the EPA. He was a part of the team that guided Pruitt through the Senate confirmation process and now will do much the same for him as head of the EPA.

Jackson was previously Sen. Inhofe’s counsel and chief counsel at the Senate Environment and Public Works Committee. He was also legislative director and chief of staff in the Senator’s personal office. Previously, Jackson was an assistant district attorney in Tulsa County and once was an associated director for the Oklahoma Farm Bureau. He is a native of Oklahoma City and studied political science at OU and received a law degree from Oklahoma City University.

Sen. Inhofe has replaced Jackson with Luke Holland, naming him Chief of Staff this week. Holland has been an aide to the senator since 2009 and most recently was Inhofe’s Legislative Director since 2015.

The Senator lost two other aides to the Trump administration. Mike Catanzaro and George David Banks were hired as White House energy aides.

Another former staff at EPW Committee when it was chaired by Inhofe is Andrew Wheeler. He has reportedly met with Pruitt to be considered for the No. 2 job at EPA.