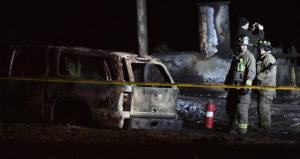 Whether it was an accident or arson, the investigation into last week’s deadly oil tank explosion near Waukomis might take a few more weeks. It’s the indication from investigators probing the blast that killed Keith Milacek, a 33-year old man who lived near the site of the oil tank batteries.

There are still reports that Milacek, who had been in disagreement with the oil operator was standing atop the oil tanks when they exploded. Investigators have made it clear they do not consider this to be “workplace-related” since Milacek did not work for Berexo LLC, the Wichita, Kansas company that operates the well.

Garfield County sheriff Jerry Niles says the cause remains unclear and added that i might take weeks for the state medical examiner to determine Milacek’s cause and manner of death.

The State Fire Marshal’s office has ruled out a lightning strike as the cause of the blast but reports indicate it has not ruled out vandalism or arson. A spokeswoman with Berexco says employees are cooperating with investigating authorities.

The fire marshal indicated about 1,700 gallons of natural gas liquids were in the tank that could hold 8,400 gallons. The blast was so fierce that the 57-year old tank was found 200 feet from where it was originally connected to equipment.