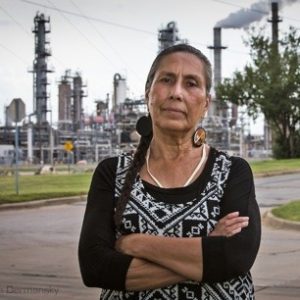 Three Oklahomans took part this week in a Democratic-sponsored panel in Washington, D.C. against the nomination of Attorney General Scott Pruitt to become the new Administrator of the Environmental Protection Agency.

“We are terrified at the idea of him becoming the head of the EPA because that blocks the avenues that we have for any remediation at all,” she stated in Tuesday’s panel hearing sponsored by Sen. Tom Carper, the ranking Democrat on the Senate Environment and Public Works Committee.

She contended that there has been a spike of cancer auto-immune diseases in northern Oklahoma.

“Children are born with bone cancer and the life expectancy is dropping significantly. We are not getting any action from the attorney general.”

Camp-Horinek criticized Pruitt for not becoming directly involved in the investigation of injection wells that caused earthquakes in the state.

Another Oklahoma to testify was Jason B. Aamodt, the founder of the Indian and Environmental and Law Group in Tulsa. He claimed Pruitt had mislead the entire Senate committee with a list of his accomplishments as Attorney General.

Aamodt was especially worried about Pruitt’s lack of action regarding lead contamination around one northern Oklahoma City.

“Mr. Pruitt on that same list indicates that he represents the Department of Environmental Quality. He had 4 opportunities to establish safe levels for lead contamination of the soil in Blackwell,” said Aamodt who added that Pruitt did not take action.

“There is more on his list of accomplishments that needs to be discussed. I know many of these other cases. But three minutes doesn’t give me enough time to talk about them. But he should really be recalled to have to answer questions about what his enforcement record is.”

The third Oklahoman on the Democrat-sponsored panel was Kelly Foster, the former Environmental Protection Unit Chief that once was in the Attorney General’s office. She is now the Senior Attorney at the Waterkeeper Alliance in Oklahoma, but during her 3 minutes before the panel spoke only of her accomplishments. She made no reference to opposing Pruitt’s confirmation.

Listen to the comments of Casey Camp-Horinek.