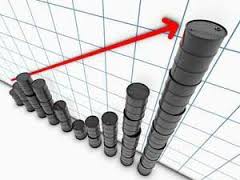 Crude oil futures continued their ascent on Tuesday, settling at their highest level since July 2015 after an energy watchdog lifted its demand forecast for this year and predicted that production cuts by major oil-producing nations will rebalance the market, according to Bloomberg MarketWatch.

On the New York Mercantile Exchange, January West Texas Intermediate crude added 15 cents, or 0.3%, to settle at $52.98 a barrel after trading as high as $53.41 a barrel.

On the London ICE Futures Exchange, February Brent crude, the global benchmark, gained 3 cents, or less than 0.1%, to finish at $55.72 a barrel. Prices for both WTI and Brent crude edged above Monday’s finish to again mark their highest levels in about 17 months.

In late November, OPEC agreed to curb production by 1.2 million barrels a day. Over the weekend, 11 non-OPEC countries including Russia agreed to cut their output by 558,000 barrels a day. The total sum represents almost 2% of global supply.

Weekly data on domestic crude oil supplies will be released by the American Petroleum Institute late Tuesday and the Energy Information Administration early Wednesday. Forecast analysts indicate that the EIA report calls for a decline of crude stockpiles between 1 million and 2 million barrels.

The top energy watchdog said global inventories should start to shrink in the first half of 2017, given the agreement by producers to cut their oil output. A worldwide supply glut is a key reason crude prices have been under selling pressure in recent years.

“The deal is for six months, and we should allow time for it to be implemented before reassessing our market outlook. Success means the reinforcement of prices and revenue stability for producers after two difficult years; failure risks starting a fourth year of stock builds and a possible return to lower prices,” the Paris-based agency said in its monthly report.

OPEC will release its monthly oil report on Wednesday.

On the New York Mercantile Exchange, January natural gas fell 3.3 cents, or 0.9%, to end trading at $3.474 per million British thermal units after dropping nearly 6.4% on Monday.