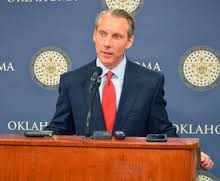 Another sign of a slowly improving energy sector in Oklahoma as November tax collections were up compared to a year ago. State Treasurer Ken Miller says it’s the second month of improvements as he released the monthly Gross Receipts to the Treasury Report.

“It would appear our anchor industry is making slow but steady improvement, while the spillover effect of the long energy price downturn on income and consumer spending is ongoing,” said Miller. “My hope is that we will begin to see overall improvement with renewed oil field activity following OPEC’s plans to cut production levels and bring supply more in line with demand.”

He said that the energy improvement was welcome news but added that collections from income tax and sales tax fell below the prior year collections.