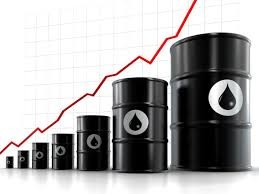 Crude oil futures rebounded on Thursday, gaining ground after a surprise setback due to an unexpected jump in domestic inventories, according to Bloomberg MarketWatch.

On the New York Mercantile Exchange, February West Texas Intermediate crude added 46 cents, or 0.9%, to settle at $52.95 a barrel.

February Brent crude, the global benchmark, rose 59 cents, or 1.1%, to close at $55.05 a barrel on the London ICE Futures Exchange.

Arctic wind and colder temperatures across the U.S. has generated an increase in the use of natural gas, which is a source for heating residential and business communities.

“The markets are realizing that it is a peak demand period [for natural gas] and that with cold weather that we see to go through storage at a faster pace than we anticipate and that in my mind is very, very bullish sign for crude,” said Phil Flynn, senior market analyst at The Price Futures Group.

Traders are now watching to see whether producers will underreport production, a behavior that surfaced in the past few weeks following OPEC’s announcement of a production cut that begins in January of 2017.