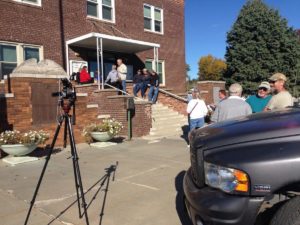 Even late into the week, some residents near a deadly anhydrous ammonia leak 40 miles north of Omaha, Nebraska still weren’t allowed into their homes.

The evacuation continued as officials with Tulsa-based Magellan Midstream Partners pipeline investigated the leak that killed a 59 year old farmer who drove into the cloud Monday night. As of Thursday night, officials said the air quality between the towns of Takamah and Decatur was still unsafe and roadblocks remained in place.

Eric Weiss with the National Transportation Safety Board said a preliminary report on the cause could take weeks to finish. But a full report into the details and recommendations might take a year or more.

The evacuation zone was down to a two-mile radius from the source of the gas, according to a report in the Omaha World-Herald.

The paper indicated that officials with Magellan Midstream held a public meeting to update an estimated 40 evacuees about the incident.

“We are trying to do everything as systematic and as safe as we possibly can,” said Bruce Heine, Magellan’s director of government and media affairs. “None of the words I can express are appropriate when one of your neighbors has passed away.”

The paper indicated Heine could not answer some of the questions raised at the public meeting. It reported that a cousin to the man killed in the incident, asked if the company would pressure his widow into a premature settlement.

“This is very delicate for us, as it is for you,” Heine told the crowd. “There will be an appropriate time for us to talk to the family.”