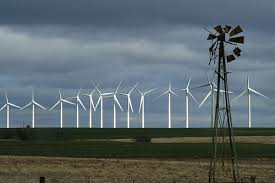 A new government report shows Oklahoma is one of eleven states that generated at least 10 percent of their total electricity from wind in 2015.

The U.S. Energy Information Administration reports that Oklahoma ranks fourth among the eleven states with 18 percent of its electricity coming from wind power.

Iowa is ranked at the top with 31 percent followed by South Dakota at 25 percent and Kansas at 24 percent. North Dakota tied Oklahoma with 18 percent, Minnesota at 17 percent, Idaho at 16 percent, Vermont at 15 percent, Colorado at 14 percent, Oregon at eleven percent and Maine at ten percent.

As recently as 2010, only three states had at least 10% wind share, according to the EIA announcement. The agency said Texas and New Mexico are on track to surpass a 10% wind generation share in 2016 based on data through July.